Two of early film’s most popular, influential and important pieces are a little hard to watch now. These are films that cannot just be written off. They are, after all, integral pieces in telling the history of film. They also happen to have racist elements.

The Jazz Singer features Al Jolson performing in blackface, something that was part of his regular routine. It would be easy to ignore the film for this fact, if it weren’t for the significance of the climactic scene and the whole film. The man in blackface is singing on screen in the first talking picture, one that would very quickly lead to a seismic shift in the world of film.

The Birth of a Nation is even more egregious, so profoundly racist in its portrayal of African Americans and the KKK that it caused great controversy when released. But it also just happens to be the biggest blockbuster film up to that point in movie history, and also a landmark film in terms of complexity and directorial/narrative structure.

Both of these films, particularly The Birth of the Nation, clearly contain elements, or even whole plots, that would be unacceptable today. But they can’t just be written off or ignored, in large part because of how important they are to the history of film. On anyone’s chart of film’s most important points, these two films would stand out as bold, huge events.

Because these are such important films, they aren’t ignored, censored or swept under the rug. And as a result of that, meaningful discussions about the racial elements of the film are always ongoing. We’ve continued to look at these films and have learned a lot about our history and our culture.

That is the optimal way to handle it, as any classic film fan knows it’s hard to avoid unpleasantness of the past. Blackface was once hugely popular as a performance style in the United States, and that’s not even including the common practice of white men playing Asian stereotypes in early films. Classic films with racist and sexist elements are all over the place, with examples and instances too numerous to name. If we remove these elements, what are we really removing? Only the opportunity to understand, learn and discuss.

Editing out blackface from film, for example, tries to erase what was a strangely mainstream and common practice for a number of decades. It’s jarring and shocking to see to see Bing Crosby saunter out in blackface in Holiday Inn and other films, but trying to act like it didn’t happen doesn’t help us understand why it happened.

It’s easy to romanticize and idealize the past. In fact, most film blogs such as this one are guilty of that to a certain extent. But not all things were better then. The truth of the matter is that African Americans, women, Asians, Italians, Jews and all other kinds of groups were often portrayed horribly and offensively in films of yesteryear. And while it’s especially horrible to see now, erasing these ugly parts does not fix anything. It erases a look at an unfortunately all too true part of our history.

Films are, after all, more than just entertainment. They are a cultural scrapbook, a time capsule of who we are, who we were and where we came from. That includes not only the good things and the beautiful things, but the ugly and shameful things as well. Those awful things tell an important story too, of how far we’ve come and grown.

Much like our own world history, we can’t only choose to remember the good parts of our film history. That doesn’t tell the whole story.

This is the first in a one week series highlighting lesser known great films. 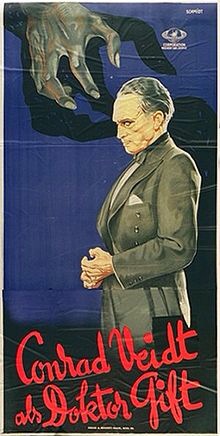 We’ve previously talked about Paul Fejos’ classic Lonesome on this site. When that film received the Criterion collection, along with it were a couple of other Fejos selections–including The Last Performance. While the former may be a touching, moving love story, The Last Performance conveys a whole different set of emotions: horror, shock and terror.

Conrad Veidt stars as an unsettling magician, one who has entered a relationship with a much younger woman. When she falls in love with the new apprentice, it’s only a matter of time before Veidt finds out and decides to get even.

Although no spoilers will be given here, viewers will likely figure out where this is headed once Veidt springs into action. That does not lessen the impact of what follows. The film’s climactic scenes are not only unsettling and unnerving, but almost scary as well. The inevitable path it heads on only adds to the tension. The viewer knows things will only get worse for the characters in this love triangle. It’s just a matter of when.

Making the film all the more unsettling is the harrowing performance by Conrad Veidt. In a way, Veidt was almost the prototypical silent film actor: an expressive an unforgettable face. The anger and torment in his eyes tells a greater story than most actors ever can.

Much like Lonesome, which also came at the end of silent films, The Last Performance later got a touch of sound as well. It appears the partial talkie version may have been released in 1929, but the film was released on a staggered schedule over the course of a couple years. It wasn’t until 1930 that it was finally released everywhere. Interestingly enough, Bela Lugosi dubbed Veidt’s voice in the Hungarian version.

While The Last Performance is somewhat predictable, it only makes the film all the more harrowing. You’ll be able to see what’s around the corner before it happens–and you’ll be hoping that you’re wrong. The Last Performance further shows that Paul Fejos was a master at whatever emotions he wants to tackle. He makes you smile in Lonesome, and in The Last Performance, he’ll make you squirm in your seat.

5th
The Cry of the Children: This short showing the evils of childhood labor is just powerful and shocking now as it must have been when it was released. Part of what makes it so shocking then and now is the footage of children working at a mill, which caused controversy at the time.
The Evidence of the Film: Another short, this crime film actually involves film itself. The film was considered lost until a copy was found in 1999.
Petticoat Camp: The final short of the night is a comedy, also starring the same actor in The Evidence of the Film.

7th
The Toll of the Sea: For those that love their film history, this film is a must see. This is only the second ever Technicolor feature, and the first that didn’t require a special projector. Early Technicolor films are always interesting to watch.

12th
Grandma’s Boy: Just Harold Lloyd’s second feature film, this was also longer than his first feature. One of the first to jump into comedy features, Lloyd was revolutionary. Plus, it’s a funny film.
For Heaven’s Sake: A later Lloyd silent feature, this one ended up being one of his biggest hits. While most of Lloyd’s films were wildly successful, this one ended up one of the most profitable silent films.

19th
Metropolis: What more can be said about this classic? Make plans to see it if you haven’t yet.
Spione: Also directed by Fritz Lang, this is another sprawling film that must be seen to be believed. This was the second to last silent film Lang would make.

26th
The Phantom Carriage: This film has been reviewed on the site before, but it bears repeating again: few films are as haunting as this one. Death and sin are handled extraordinarily in this haunting film.

There are countless directors, writers and other screen professionals who we know, despite not knowing their names. Their work is incredibly familiar to us, but their identities remain unknown to us, save for noticing their names in credits. Fred Newmeyer and Sam Taylor are two of those names. If you’ve watched silent films, particularly comedies, you’ve seen their work. And if you’ve seen any of Harold Lloyd’s most popular work, you’ve seen some of their biggest films. At the height of his career, Lloyd almost always worked alongside Newmeyer and Taylor. Together, they co-directed (or in some cases, one wrote and one directed) A Sailor Made Man, Grandma’s Boy, Dr. Jack, Safety Last!, Why Worry?, Girl Shy, Hot Water and The Freshman. That accounts for Lloyd’s first eight features, all of them major. Both before and after these films, the two men had remarkable and interesting careers. Let’s take a look at them both.

Fred C. Newmeyer’s career inside and out of film is a unique one, and there may not be another one like it. Before entering film, Newmeyer was actually a minor league baseball pitcher, and a decent one at that. From 1911 to 1913, he played for such fantastically named teams as the Bay City Rice Eaters and the Muscatine Wallopers. Thanks to the wonders of the internet, his complete baseball stats can be viewed here.

Legend claims that Newmeyer worked his way up from extra and prop man all the way to big time director. It is true that Newmeyer worked as an actor long before he ever got into directing. His film debut came just a year after he left baseball, in 1914. By 1916, he was already a regular partner of Lloyd’s: as actor. At the time, Lloyd performed under his Charlie Chaplin-esque Lonesome Luke character. Newmeyer continued to appear in small Lloyd roles up until Safety Last!. Of his 71 credited acting roles, almost all were in Harold Lloyd films.

By 1920, Newmeyer began directing comedy shorts, including some with Lloyd. He even directed the first Our Gang short, but his version was canned and never released after a bad test screening.

Newmeyer never truly explored different styles until after his partnership with Lloyd ended. After directing Richard Dix in a few films, Newmeyer ventured out into new realms with the coming of sound. In 1930, he directed two early talkie musicals and as the decade began, and settled into making mysteries his speciality as the decade wore on. In 1937, he finally directed an Our Gang short that got released, and mostly retired after that.

Sam Taylor’s career both began and ended as a writer. Starting in 1916, he was a regular gag man and writer for the Ham and Bud comedy duo, as well as others. Along the way, he also showed signs of his later career by writing more dramatic screenplays and stories. Taylor established a variety in his styles from the very start.

His connection with Lloyd started not as a director, but as a writer. He co-wrote Lloyd’s 1921 shorts, the final year he made them, before co-directing the next year. He went from writing straight to directing some of the most beloved silent comedies of all time.

When his partnership with Lloyd ended (for the time being), Taylor quickly found himself with a new partner: Mary Pickford. All told, he directed Pickford in four films, including her Oscar winning Coquette performance. Norma Talmadge became a regular actor as well, as he continued to work on dramatic films throughout the early 30s.

Taylor directed Lloyd one more time, the 1934 talkie The Cat’s-Paw. That marked the same period he mostly retired from film, focusing on writing outside the screen. He wrote at least one Broadway play, but is not to be confused with a more prolific Broadway writer of the same name.